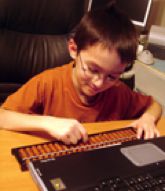 Why children need to learn math using the abacus:

A PERFECT TOOL FOR THE MIND!

Measures of brain activity show that during the second half of a child's first year to the first decade of life, the prefrontal cortex, the seat of forethought and logic, develops synapses at a furious rate that it consumes twice as much energy as an adult brain.

Lacking appropriate brain stimulations during the development years has a significant negative impact on the cognitive ability of children and correlates with decline in brain performance later  in life.

80% of the world's people have a more developed left brain.

Dr. Roger Sperry of the California Institute of Technology won a Nobel Prize for his work on the functions of the brain's hemispheres.

Our brain cells (call Neurons) communicate with each other through an electrochemical network of connections call synapses. The information go into a neuron's body through a thin extension call dendrites (see above picture) and the thicker extension call axons take information away from the cell body.

A simple guide to neurons

Abnormalities in the production or functioning of certain neurotransmitters have been implicated in a number of diseases including Parkinson's disease, amyotrophic lateral sclerosis, and clinical depression.

The human brain consists of some 100 billion interconnected nerve cells with innumerable extensions.

Using EEGs to enhance biofeedback, a person can be taught to monitor and regulate his or her own brain waves.

In the 1970s psychologist M. Barry Sterman taught cats to control their brainwaves in his laboratory.

Brainwave training is an effective intervention for epileptic seizures in humans.

One hundred billion neurons may seem like a lot of nerve cells, but is actually only about 20% of the number we originally start with....

1930: Ivan Petrovich conducted the famous experiments on his dogs. The concept of conditioning is born.

1967: M. Barry Sterman taught his cats to control their brain wave and the resulting subject becomes resistant to epileptic seizures.

Four-State of the Brain

ALPHA: Relaxed, brain wave activity slows into what is called an alpha brain wave pattern. Alpha patterns vary from deep alpha, a state of deep relaxation often referred to as the "twilight state" between sleep and waking, to the higher end of alpha which is a more focused yet still very relaxed state. Thus it is also referred to as the 'super-learning' state.

THETA: Slower still are theta waves. Theta is best known as the brain wave state of dreaming sleep, but it is also associated with a number of other beneficial states, including increased creativity, some kinds of "super learning," increased memory abilities, and what are called integrative experiences. "Ah-ha!" experiences, where you suddenly "get it," have an insight, are accompanied by bursts of theta waves in your brain.

Mathematical knowledge of half a million students from forty-one countries was tested. Of these countries, the test shows that American students performed below average in mathematics. One of the most famous studies of its kind is called Pursuing Excellence, the Third International Mathematics and Science Study.

The mathematical education provided in the United States has proved to be inferior compared to that of other countries. Specifically the Japanese and other Asian educational systems produce more educated mathematics students than the United States. American children tend to score lower on standardized testing than Asian students do.

Many studies have been done by research groups such as the National Center for Education Statistics of the U.S. Department of Education and the International Association for the Evaluation of Educational Achievement showing the differences in teaching methods between the United States and Japan.

A traditional abacus has 2 fives and 5 ones on each column because of 16 based calculation  of old Chinese unit of measurement.

A modern abacus has 1 five and 4 ones on each column because of 10 based calculation.

Abacus Math is also the best mental math training that is proven in the history.